Discoid markers, discoid headstones and disc, wheel or ring headed crosses, including Celtic crosses, have been used since well before the Christian era. Some, such as gravestones, are commemorative. Others are directional or indicative, as is the case with wayside markers and crosses. They all can have a similar and sometimes overlapping morphology. Probably the best known of this group of objects are the so-called wheel or ring headed Celtic crosses, that almost invariably have a decorated long shaft. Most of the Cornish wayside crosses, and other markers from elsewhere in England, also have a long shaft and those that do not probably have been shortened at a later date and used as gravestones. These wheel headed and wayside crosses constitute one subgroup of markers characterised by the long shaft. 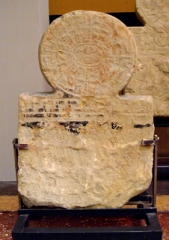 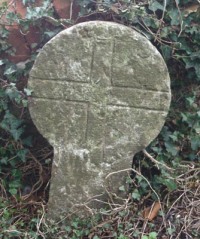 In the French Languedoc, the Basque Region of both France and Spain and in Portugal there are several thousand discoid markers, most of which are Christian gravestones. Many are medieval and lack inscription, but are carved with abstract flower shapes, geometric forms, and more rarely human heads, animals, astronomical signs, arrows, interweaving as well as many designs that are anomalous. They are characterised by their simple disc head and short shaft which is usually, though not invariably, of an inverted triangular form. In several parts of Europe, including Britain, similar medieval discoid markers have been found. Although some of these may have had longer shafts, most probably were relatively low and resembled those in southern Europe. The greatest concentration of British medieval discoid gravemarkers is in Kent, where more than 100 have been found, although many of these are fragmentary and we cannot be certain whether the incomplete ones are gravestones or wayside markers. Most of the Kent discoids are similar to the southern European artefacts. The design on the few known Scottish medieval disc head fragments found at Bute, Saughtree, Gullane and Glasgow is dominated by a cross. Complex disc-headed gravemarkers can be found in Bulgaria and Serbia, probably ranging in date from late medieval to the nineteenth century. 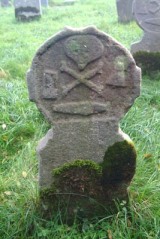 Post-medieval discoid headstones of the late sixteenth to early eighteenth centuries can be found in continental Europe, Scotland, England and many in west Ulster in Ireland. Other than in the Basque Region and north-western Ireland, discoid gravemarkers usually occur in very small numbers at any one site, often as single examples.

The influence on, and meaning of memorials of this form have been disputed for some time. One view is that they are anthropomorphic, representing the human figure. Some late eighteenth and nineteenth century gravemarkers from Bulgaria are known to represent husband and wife, or male a female, the discoid form being female and a form in which the head is an inverted triangle, referred to as a ‘key’ memorial, represents the male. Some discoid gravemarkers in North Carolina are also considered to be anthropomorphic. However, some authors suggest that they are based on a cross, mainly because of the ‘arms’ or other cruciform structures that are present on some, but not all discoid memorials. These appendages can be found on the discoid gravemarkers of West Ulster in Ireland and the discoid markers of Kentucky and North Carolina. Another view is that the discoid element is a legacy of ancient sun-worshipping cults or simply a fixation with the circle.